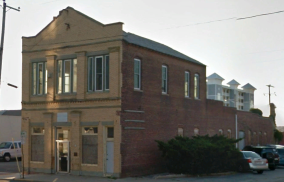 Above left is prior to the Crisfield Heritage Foundation commencing the Customs House Project.  The right picture was taken after the installation of a new roof, windows and masonry repair.

The Customs House Building has a long, fascinating history that began over a century ago.  It served as the postal and customs office for over two decades when in the 1933 these offices were moved uptown to the corner of Main and 4th Streets.  It was at this time the building became the location for the hardware store Clarence Sterling and Son until they closed in later part of the 21st century’s first decade.

The building remained vacant until it was purchased by local businessman and philanthropist, Jay Tawes, in December of 2014.  The following April, Mr. Tawes sold it to the Crisfield Heritage Foundation and since then, the main focus has been on saving the building.

Over the past year, major renovations have been underway with a new roof, complete masonry repair, replacement windows and second floor renovations taking place.  The removal and replacement of the ground level flooring is scheduled to begin February 2017.

Determining the vision of the Customs House Project is currently in progress.  Check back for preliminary ideas and to be part of public input phase of the project.  If you’re interested in  helping with this historic project, please go to our “Get Involved” page for more information.